75 Meters has a reputation for being 'the wild child' of ham radio bands. Bring up 75 meters with any ham and you'll hear words like 'wild', 'bad taste', 'hard to break into' and 'I don't have an amp'. Indeed, 75 meters can be somewhat intimidating, especially when you consider the the sheer number of operators on 75 at night as well as the vibe that many hams seem to send to newcomers----a message that suggests "Don't come in here, we're not looking for new people."

In spite of all the craziness, 3.916 Mhz has emerged as an exception to the 75 meter stereotypes.

Every night of the week, you'll hear a 2 very friendly groups on 3916. Starting at 8:30 PM (Central), The Tailgaters is a 'pass it around net' that doesn't have a net control. No Net Control?Sound crazy? Well the format actually works. Instead of one station directing the check ins, The Tailgaters is like a game of 'radio tag'. When a station checks in, he or she is tagged by the calling station and encouraged to take over the net control duties long enough to find another check in. The result is fun and fast-paced net that does an incredible job of including everyone. On any given night, 30-40 stations check in and all have a chance to put out a call as net control.

From 10PM to 12:30 AM, The Tailgaters gives way to The Freewheelers Net. The Freewheelers features a different net control station each night. Net operators call check-in stations from around the country. In the 2 1/2 hour net, there are generally 2-3 rounds. The Freewheelers averages between 50 and 70 check ins each night. The record for one night of check-ins is over 100 stations.

The late Ken Odom (W4FCW-sk) is given credit with starting The Freewheelers in 1998. As several senior net members recall, Odom had been trying to check into a 75 meter net when he was rudely asked to leave the frequency and not return. Frustrated, he found 3.916 open and put out a CQ call. The rest, as members say, is history. Odom and several other hams all agreed that 75 meters needed a frequency where 'all are welcome'. Further, Odom and other founders created a net policy of 'no politics, religion or inappropriate topics'. The policy remains in place today and is one of the reasons the nets have found success. Regardless of your background, politics, religion or other traits, 3916 is a frequency that welcomes all.

The Tailgaters & Freewheelers Nets are on the air nightly, Sunday-Friday nights. On Saturday night, the group holds 'The Saturday Night Free-For-All' which is essentially an unstructured rag chew that runs from around 8PM to well after Midnight.

The Freewheelers Net recently passed the 1,000 member mark on Yahoo Groups. And, when you consider that the Club was at around 150 members in 2005, it's clear that this is one of the fastest growing nets in amateur radio.

For more information on The Tailgaters & The Freewheelers, go to 3.916 Mhz or check out the Net's web sites. On Yahoo Groups, search the keyword 'Freewheelersnet'. On WWW.Facebook.com do a search for 3916.
Posted by Pete Thomson at 12:31 AM No comments: 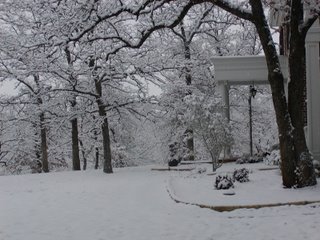 Every year we get at least one...a Texas Snow Storm. It's funny...just before it comes, everyone storms the grocery store as if we'll be trapped inside our homes for weeks...maybe months. Bread...gone. Milk...nowhere to be found. Beer....forget it. It's like a mini-Y2K. And then, as previous years have all shown, life returns to normal.

Here's a picture of a recent snowstorm at our home. This was taken at about 7am just after a fresh blanket of snow.
Posted by Pete Thomson at 7:00 AM No comments: 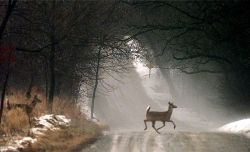 It's Wintertime in Texas....my favorite time of year. My wife loves winter because the bugs take a break. I like winter because it's a time when friends and family come inside to be with each other. There's nothing I'd rather do that get a big ol' 'Yule log' in the fire place and watch a movie with the family.
As a Ham Radio operator, wintertime often brings the best band conditions that allow for clear, long-distance communication. As a kid growing up in Iowa, I remember staying up way too late at night during the winter listening to DX (distant) shortwave broadcasts from far-away, exotic places.
Winter's great. Enjoy...and don't forget the feed the deer!
Pete
Posted by Pete Thomson at 8:00 AM No comments: